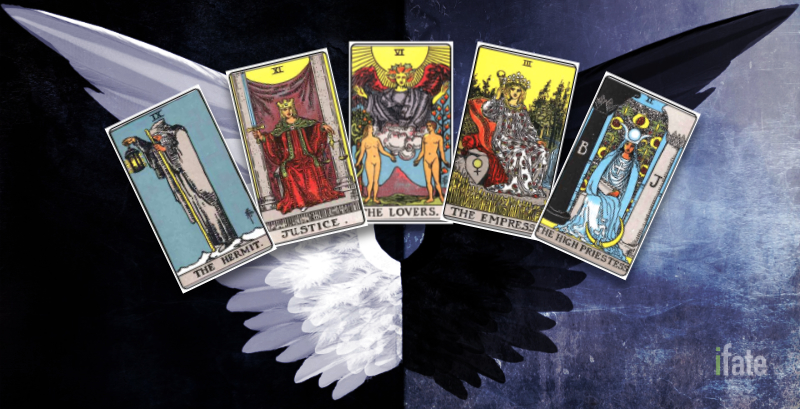 NO
Tarot is not a religion or belief system. It encourages no behaviors. It does not include or preclude any system of morality. It is a framework for introspection and self-discovery. Tarot can also be used for divination, but that's up to the reader.

Are tarot cards evil? We’ve all heard the question. Or maybe it’s an accusation. Either way, it’s always struck me as an odd one because the imagery and symbolism of tarot pays shows such deep respect to religion.

Still, anyone who reads tarot cards has had to answer this question at one point or another.

Let’s get a couple of things out of the way for those who found this page looking for answer to this question from a religious perspective.

So where does this question about “evil” come from?

I think the reason this accusation gets bandied about so often is that most of the world’s religions tend to be defensive about outside concepts. On top of that, tarot’s imagery tends to be very “religious looking”. From that perspective it would be easy to mistake it for a “competing” religion of some kind.

It has no laws, no edicts, no underlying belief system to speak of. Tarot is merely a framework for introspection and the pursuit of intuition.

Another big reason tarot gets hit with the “Evil” label is probably the artwork: There’s the scary-looking Devil card, a Judgement card that looks like a scene from the Walking Dead, and the fiery disaster pictured in the Tower card doesn’t exactly give newbies warm, fuzzy feelings.

But after studying tarot, any tarot student eventually realizes that none of those scary-looking cards have particularly scary meanings. The Devil in tarot simply represents  the dangers of “temptation”. The angelic figure in Rider Waite Smith’s Judgement card is a representation of the angel, Gabriel — hardly a figure to fear. The Tower can be a rather positive warning against ego and unbridled ambition.

Tarot is merely a framework for introspection and the pursuit of intuition.

Now, to be fair: If your personal beliefs are so strict they conflict with any system of intuition, introspection or prognostication which lies outside the well-defined bounds of your religion — then it’s probably safe to say that tarot is not for you. But not because tarot is in any way anti-religious or disrespectful towards religion. Quite the opposite. Take a walk through the cards of the Major Arcana in early decks and you’ll see an homage to religious history and Biblical concepts.

Likewise, if you find yourself objecting to the use of religious imagery in an extra-religious setting, then there are hundreds of tarot decks out there which use secular imagery, and represent secular concepts.

If anyone can show me an example of tarot actually being responsible for some “evil” in the world, I’m all ears.

But again, your definitions might not be everyone else’s definitions.