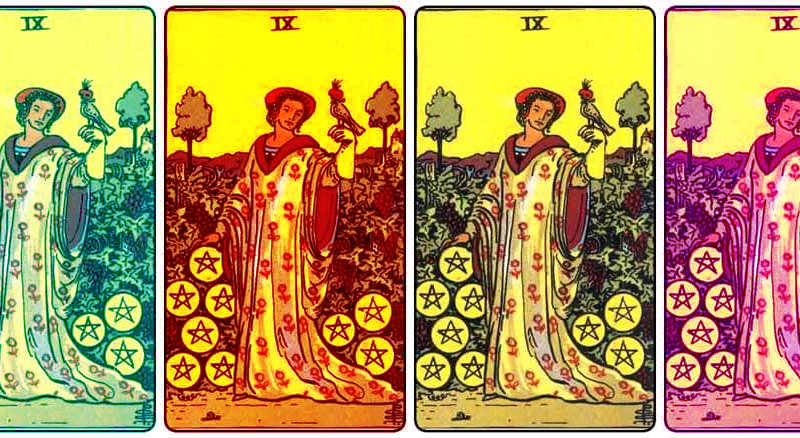 Here’s a pet iFate Tarot theory that I absolutely love:

Take a good look at this Nine of Pentacles tarot card from the classic Rider Waite tarot deck. Chances are if you’re a fan of tarot, you’ve seen it 1000’s of times.  (If you haven’t, here’s our main Nine of Pentacles page, for the basics)

As happens so often in tarot, sometimes it only takes one symbolic key to unlock a world of additional meaning …

What do you see? A tall gracious woman holding a falcon aloft?

If it weren’t for one small detail that might be the end of the story.

What else is there? If you look more closely you might notice that the woman is rather tall compared to women elsewhere in the tarot deck. And rather square jawed. And surely there must be some reason for her pursuit of falconry. But none of those things alone tell us much of a story.

At her feet there’s something curious though. Something altogether out of place compared with the rest of the cards:

What’s it doing there?

As happens so often in tarot, sometimes it only takes one symbolic key to unlock a world of additional meaning. Once you understand the “key”, the rest of the symbolism falls beautifully into place.

Before going down this conceptual rabbit hole, let’s first agree that all theories about tarot symbolism are just that: theories. The artist has long since left us, and barring the discovery of her diaries, there’s zero chance of this ever being conclusively proven.

Likewise, it’s important to point out that like all artwork, the Rider-Waite deck, is a product of its time. In prudish post-Victorian England there were many things that could only be alluded to, but never said out loud.

In 1908, when Pamela Colman Smith was hard at work drawing her tarot illustrations, homosexuality was one of those forbidden topics. And “transgender” certainly wasn’t a household word. Even discussing such things could land artists and writers in hot water.

The snail on the Nine of Pentacles

So, back to that snail…

Snails aren’t known for their deep symbolic representation. But there is one thing that they do symbolize — and did symbolize back in the early 20th century.

Snails, as any good malacologist will tell you (Yes, apparently there’s a word for scientists who study snails), are hermaphrodites. That is, they’re neither truly male nor truly female and perhaps somewhere in between.

By understanding that one symbolic “key”, the other symbols within the Nine of Pentacles card suddenly begin to line up. She’s strikingly tall. She’s unusually square jawed. And maybe the entire purpose of her love of falconry, was really to conceal a certain wrist position — which in the early 20th century was often associated with those who shall we say, were gender liberated?

Looking more closely, the pattern on her dress is curious too: Are those flowers? Or are they a clever cross between the well known symbols for male and female?

What we may be looking at in the Nine of Pentacles is a crypto reference to a transgender woman — a forbidden subject in Colman-Smith’s day.

So does that make transgender issues the core meaning of the Nine of Pentacles card? I wouldn’t go that far. It’s certainly not something that Arthur Waite, co-creator of the deck, even mentions in his seminal book on tarot.

The way all the details line up however, is far too coincidental to be ignored. And given that an openly transgender tarot card would have been an impossibility in Pamela Colman Smith’s day, there could definitely be something here.

Next time the Nine of Pentacles crops up in a tarot reading, consider the possibility that the cards are referencing something that couldn’t be said openly over a century ago.

Aside from the widely accepted Nine of Pentacles meanings which include opulence, luxury, and refined tastes — consider adding this additional interpretation to your list of references when the card comes up in your next reading.

570 readings
Hey i am natural born clairvoyant i use my natural abilities,tarot cards and beads to guide you...
watch livestream
RRaymondStar

29,830 readings
I am the best at what i do. God called me to oranum to help people, who need clarity with things ...
watch livestream