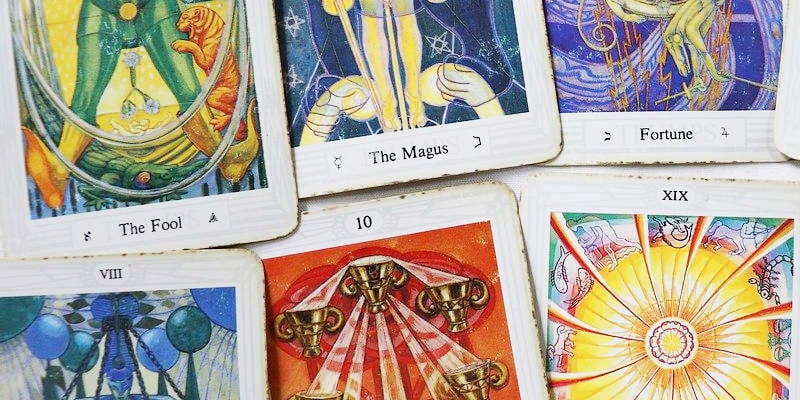 UP TO YOU
There's no set rule on whether or not it's a good idea or a bad idea to buy a used tarot deck. Thousands of people buy pre-owned and used tarot cards every year. The decision is up to you.

A few readers have written with the question, “Is it bad to buy a used deck of tarot cards?”

This is a controversial topic, to be sure. Many experienced tarot readers feel that older sets of cards may have stored “bad experiences” or dark energies associated with them. I’m not one of them, but keep in mind that this is just my personal perspective. Ultimately, the decision to purchase a used set of tarot cards is a personal decision for every tarot reader.

Here’s my take: Personally, if I really loved the deck and it was a really hard-to-find deck, then I wouldn’t hesitate to snap it up.

There are plenty of out-of-print tarot decks which are collectors-items and are highly sought after by tarot readers. Right now, there are two decks that I’m personally searching high-and-low for because I think they’re breathtakingly beautiful. They’ve both been out of print for decades, but I will find them! And yes, when I do find them I will use them for readings.

While there’s a slim chance I’ll get lucky and locate an old but unused deck, I’m okay with finding an old deck and blessing it myself.

Here’s another way to look at this question:

Hypothetically speaking, if you had the opportunity to do a reading with a 500-year old deck of rare, priceless Visconti-Sforza tarot cards —would you?

I sure would. For me, and probably for you too, it would be the experience of a lifetime. I can’t think of anything more fascinating or wonderful than to hold a deck of cards that dated back to the European Renaissance.

Maybe that’s an extreme example, but the point is I’m okay with centuries of past experiences being stored up in the energy of a used tarot deck.

I think decks all eventually develop an “understanding” with their owners. Or maybe it’s just that we owners come to understand our decks. Either way, eventually all decks become familiar over time

I’m not one to believe in negative energy stored in a used set of tarot cards because I think decks all eventually develop an “understanding” with their owners. Or maybe it’s just that we owners come to understand our cards. Either way, eventually all decks become familiar over time.

At least that’s been my experience.

But if owning a pre-owned deck is too eerie for you, then to each one’s own. I know many tarot readers who feel that way, and I respect that point of view.

I suppose a more realistic question is:  Would I buy a used “classic deck” like a used Rider Waite tarot deck or a used Zen Osho deck?  No. Probably not. I just can’t think of why I’d prefer a used tarot deck which is readily available in stores over a new one.

I understand there might be something aesthetically pleasing about an old, dog-eared set of Rider-Waite cards, I’d rather be the one personally responsible for their worn condition.

43,720 readings
I am a clairvoyant clairsentient, a unique psychic reader. I am the only one can do coffee reading ...
watch livestream
amanda323