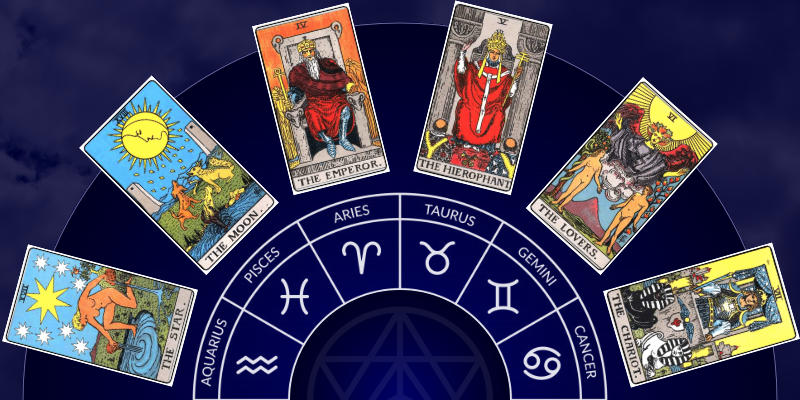 How Tarot and Astrology Relate

One of the most sought-after connections in the world of divination has always been the elusive tarot astrology relationship. Are the two fields related? How and where do these two giants of universal truth intersect?

The answer is a complex one, but it’s worth exploring.

If you’re still just a tarot beginner, you might want to skip this article and practice your tarot reading until you’re ready for something more advanced.

If you’ve got a handle on the basics of both astrology and tarot, then make your best cup of tea, sit back and let’s dive in.

Astrology and tarot: Searching for a link

The first explorers to search for a definitive connection between astrology and tarot cards were the legendary occultists of The Golden Dawn.

NOTE: For readers who aren’t familiar with the Golden Dawn, they were a secret society founded by Freemasons in the 19th century and active in England until the early 20th century. The Golden Dawn’s mission was a deep exploration of astrology, tarot and other occult studies. Golden Dawn members were responsible for some of the most classic tarot decks ever made. These include: The Rider-Waite Tarot, The Thoth Tarot, The Golden Dawn Tarot and the Builders of the Adytum Tarot. 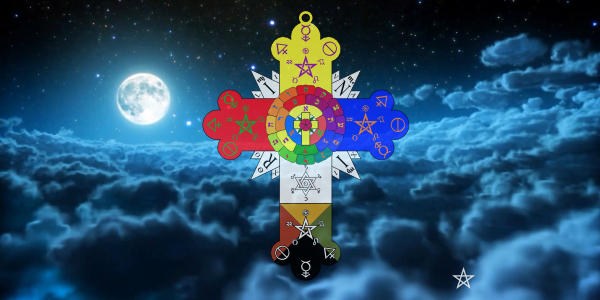 In the early part of the 20th century, the group succeeded in creating a complicated yet fascinating, unified astrology tarot system. When applied correctly, this unified system can augment tarot readings with additional layers of astrological meaning and can add interesting new interpretations to the cards.

If you’re a fan of both tarot and astrology, it’s a system worth exploring.

Astrological associations to tarot based on modality

As many readers may know, each zodiac sign has its own associated elements, planets and modalities. The subject of modalities is often overlooked in everyday astrology, but it’s very important here when calculating tarot correspondences for Minor Arcana cards.

For those who are unfamiliar with the modality concept, the most important thing to know is that each astrological sign exhibits one of 3 special characteristics. These 3 characteristics are called modalities. They are:

Modalities divide the sky into three different categories, with each zodiac sign having one of the 3 qualities.

So why are we discussing modality? Because like the zodiac signs, Minor Arcana tarot cards can also be divided into modalities.

Here’s how that works:

As you probably noticed, this system doesn’t cover all Minor Arcana cards so far. It leaves out the Aces and the court cards. The Golden Dawn system does not actually assign astrological values to the Aces or the pages, but there are ways to use them within the system. We’ll circle back to Aces and Pages in a minute.

As for the Knights, Queens and Kings in the Golden Dawn system, they can be interpreted as follows.

At this point though, we still don’t have a specific zodiac sign for each card. As you can see in the bulleted list above, we have four possible signs for each group of 3 numbered cards, so we’re still a long way from having a single astrological sign for each card.  To distill the associations further, we need to consider the associated element behind each suit:

This brings us to this handy table which shows the relative sign for each of the numbered Minor arcana cards:

What about a tarot astrology connection for tarot Aces and Pages?

Technically speaking, neither Aces nor Pages are assigned to signs in the Golden Dawn framework. While they can be assigned astrological values, they are not considered strong connections.

In other words, if we assign each Ace to it’s elementally-related signs we get:

While that “works”, it’s obviously not nearly as strong an association, as cards 2 through 10 and the Knight, Queen and King.

Now that we have the Minor Arcana associated to its relative astrological sign, let’s move on to the Major Arcana.

NOTE: The Golden Dawn’s astrological associations for the Minor Arcana only uses the classical 7 planet system of astrology. Thus, only 7 planets are assigned to tarot cards under their model.

First, the zodiac signs: Here’s a visual reference showing the associations of tarot cards with the 12 signs of the zodiac. 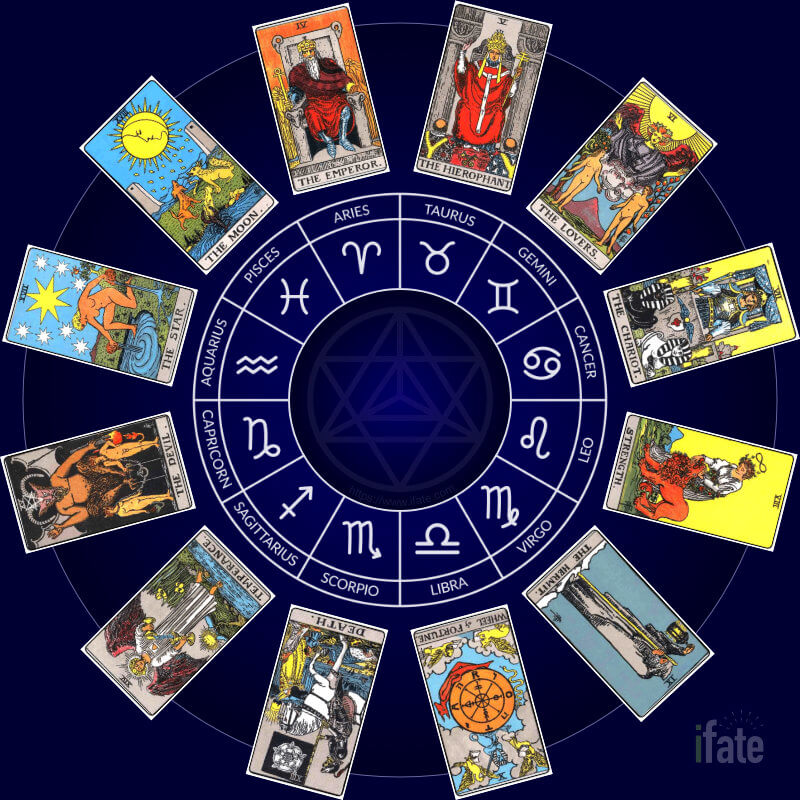 Here’s a complete table of the Major Arcana and its astrological associations, including planets, elements and zodiac signs.

The planets associated with the Major Arcana

The zodiac signs associated with the Major Arcana

The Golden Dawn were brilliant occultists with deep insights into both tarot and astrology. Is this the only possible means of associating tarot with astrology? No, certainly not. But it is the most widely accepted tarot-astrology unified theory.

Either way, as a tarot reader, the link between tarot and astrology can be a powerful one, and it can be applied tarot readings for an additional dimension which incorporates a wealth of astrological references. Exactly how much weight to place on any tarot card’s astrological properties in a reading is of course, up to the reader.

Can I use the Golden Dawn tarot astrology system while analyzing birth charts?

Unfortunately, the system created by the Golden Dawn is mostly an augmentation to tarot, rather than a true two-way connection between tarot and astrology. For a variety of reasons that are beyond the scope of this post, the Golden Dawn system doesn’t work particularly well to enhance the meanings of astrological birth charts with an additional layer of tarot information. It would be wonderful if it did.

None of this means can’t try to add tarot meanings to your astrological charts.  While the results may be interesting, don’t expect any universal consensus on that practice.