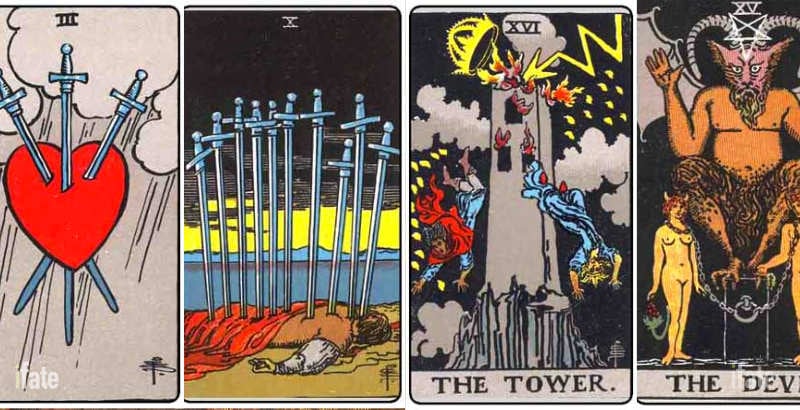 IT'S COMPLICATED
The most negative card in the entire tarot deck is probably the Ten of Swords, although it depends on the situation and its position in a tarot spread.

There’s an ongoing debate as to what the very worst tarot card in any deck is.

Many readers would probably guess the Three of Swords. Others might say the Tower or the Death cards.

The Three of Swords? Sure, it’s a card of mourning, sadness and loss. As bad as that sounds, sadness is usually not a permanent affair.  It’s mostly something you can expect to get over in the near- to medium-term.

Is it the Death card?

Probably not. Remember, Death, in tarot terms is about a cyclical-end to a long-term trend. More importantly, the Death card also contains the ideas of rebirth and starting the cycle over again — which is often not a bad thing at all.

most experienced tarot readers would probably agree that the worst card in the tarot deck is the Ten of Swords.

I think most experienced tarot readers would probably agree that the worst card in the tarot deck is the Ten of Swords.

The worst card in the tarot deck

First off, the artwork on the Rider Waite Ten of Swords card shows us a scene which is about as bad as it gets. 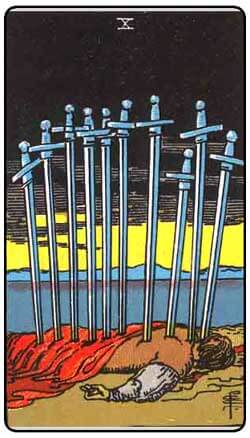 A good general rule to remember about the Suit of Swords is that the direction the swords are pointing usually gives an indication as to the positivity or negativity of the card.

Another general rule to remember about  the Suit of Swords is that the number of swords pointing in any given direction tends to indicate the degree of just how good or bad things are. If some swords point up, and some swords point down, the card tends to be a mixed bag.

Given that the Ten of Swords not only has more swords on it than any other card, and they’re all pointing down; well, just by the numbers, this card is as bad as it gets — for Swords cards, at least.

Now on to the dead guy: Visually speaking, the scene can’t be more bleak. Just look at poor Bob. It’s bad enough to be stabbed once.  But this is bad on an epic scale: He got stabbed with ten swords — in the back no less.

It’s no surprise that the meaning of the Ten of Swords is “Ruin“.

This isn’t some short-term loss, or a cyclical downturn. This is it. This is the end of the road for Bob.

Assuming you drew just one card, the Ten of Swords is certainly not positive. But if you’re doing a larger tarot spread, then it’s entirely possible that sense of finality may apply to something that needs to end. There are some cases when the final destruction of something may be a good thing.

Lastly, one thing to note in the Ten of Swords artwork is that those heavy black clouds seem to clear up in the distance. While things are as bleak as they can possibly be right now, there’s daylight up ahead on the horizon.

To research the meaning of any tarot card, see iFate’s complete index of tarot meanings. 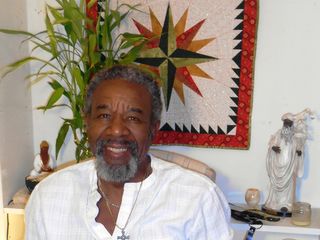 29,830 readings
I am the best at what i do. God called me to oranum to help people, who need clarity with things ...
watch livestream