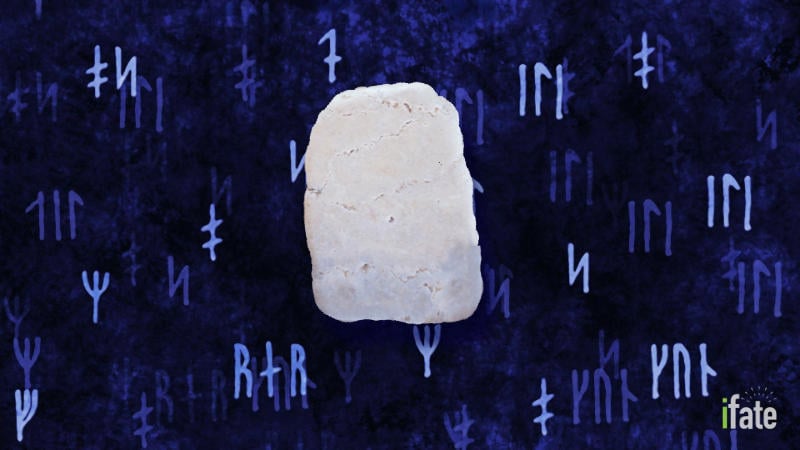 NO
The so-called 'blank rune' is a modern addition to the Elder Futhark runic alphabet. Blank runes are included in many rune sets, but are not considered a traditional part of runic writing or rune lore. The choice to include the blank rune in rune readings up to the reader.

“What’s with this blank one?”

If you’ve purchased a set of runes, you may have seen a strange “blank rune” included in your rune bag, and wondered what it is.

The truth is, the concept of the “blank rune” is a modern invention invented by author Ralph Blum in his popular introduction to rune divination, The Book of Runes. The book includes a set of “25 runes” and a rune satchel for storage.

Historically speaking, there are 24 runes in the Elder Futhark rune alphabet — not 25.

(Blank rune aside, if you’re new to rune reading, The Book of Runes is an excellent introduction to rune reading, and it comes with everything you need to get started. The included rune set includes the optional “blank rune” which you can set aside if you like.)

How many runes are there, really?

Historically speaking, there are just 24 runes in the Elder Futhark rune alphabet — not 25. Blum’s inclusion of the 25th rune was his own brainchild, which he felt was necessary to round out the runic lexicon with additional meaning. Was it a good idea? We’ll leave that call up to the reader.

Traditionally speaking though, there are just 24 runes in the Elder Futhark. The 24 runes are commonly divided into three groups called “Aetts” of 8 runes each.  (The word “Aett” literally means eight).

As you can see in the image above,  Blum’s blank rune would sit on its own, outside of the Aetts. Many rune readers object to this addition because it not only breaks with thousands of years of history, but breaks the symmetry of the Aetts, creating a fourth row of just 1 rune.

Other rune readers like the modern addition because it brings an open-ended aspect to rune meanings.

What does the blank rune mean?

“Here the Unknowable informs you that it is in motion in your life. In that blankness is held undiluted potential. At the same time both pregnant and empty, it comprehends the totality of being, all that is to be actualized. And if, indeed, there are ‘matters hidden by the gods’, you need only remember: what beckons is the creative power of the unknown.”
— From the Book of Runes by Ralph Blum

This runic wild card opens up runic interpretations a bit and offers readers the additional ideas of chance and infinite possibility. As Blum says, “Nothing is predestined: the obstacles on your path can become the gateways that lead to new beginnings.”

This positive message is a welcome note for many rune readers, who prefer the possibility of an open-ended rune reading — one which leaves all doors open and all paths unblocked. Others have criticized it for being the runic equivalent of the Magic 8-Ball’s “Reply hazy, try again”.

As with modern decks of tarot cards that include additional cards, there’s no right or wrong answer.

Is the blank rune necessary?

Even if you don’t like Blum’s blank rune concept though, don’t throw it away. One excellent use for it is as a spare rune just in case you lose one. All you need is a sharpie and it becomes any rune you like.

This simple 3-rune spread borrowed from tarot, reveals the past, present and future of any situation, person or event.

54,495 readings
***one of top experienced & best reader mentor working with oranum since they launched. I have vast ...
watch livestream
Essi

43,720 readings
I am a clairvoyant clairsentient, a unique psychic reader. I am the only one can do coffee reading ...
watch livestream
Morrdor

27,255 readings
Celibate for 12 years, so extraordinary perception & clarity. Look into the future, or past, add ...
watch livestream